Excellent progress has been made recently and I think we can confidantly predict that our new outdoor pool at Imber will be open in time for the May Bank Holiday weekend. Great news indeed. Let’s hope for some fantastic weather and those coming to the Happy Days Music Festival may have to brink their trunks! 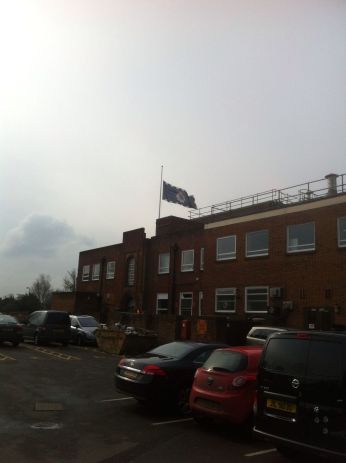 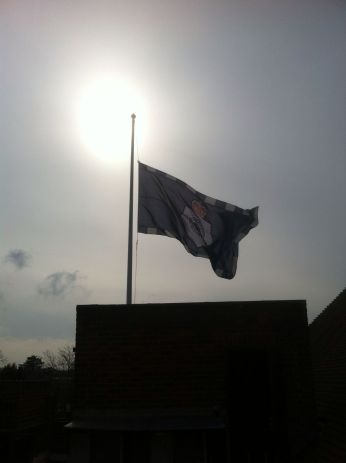 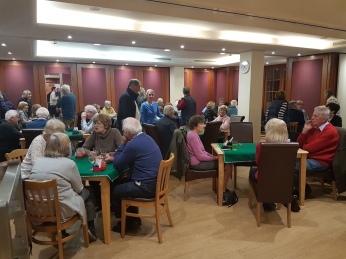 Monday Bridge Night at Imber is becoming really popular. Completely oversubscribed this evening and left Tristram in the bar scurrying around looking for more packs of cards and Jake our Duty Manager setting up more tables.

A great game , enjoyed by many and is growing week by week at Imber

Our Manager Yogi was a guest recently of the Welsh Guards where he attended their parade and following which he was entertained and well looked after in the NCO’s mess. 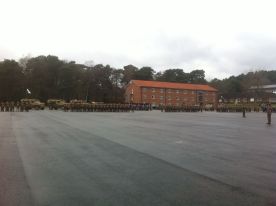 So why was he invited? It is all to do with the history of Imber Court and goes back to the 2nd World War. The local area was known as ‘Doodlebug Alley’ and often the German V1 ‘Doodlebug’ Flying Bombs on route to London would fly overhead.

Unfortunately on the 30th June 1944 one such bomb fell onto Imber Court and killed 20 members of the Welsh Guards Training Battalion who were enjoying the facilities at Imber and competing in their regiment’s annual sports competition.

A memorial to those soldiers is in the grounds at Imber, and every year in June a service of remembrance is held. 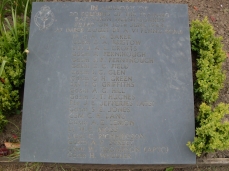 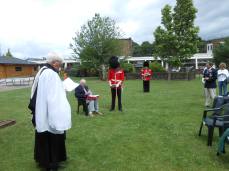 I have lifted a more detailed description of that day (including an eye witness account) from the Kings School Canterbury Roll of Honour commemorating 2nd Lieutenant George Alan Hill BAKER (312981) who was one of the 20 who died and was aged only 19 years of age.

“He was born in London on the 10th of November 1924 the only child of George Baker ARCM a baritone singer and Chairman of the Royal Philharmonic Society and his second wife Katherine Hill (formerly Convers nee Miller) (singer) who used the stage name of Kathlyn Hilliard of St John’s Wood in London.

He was educated at Arnold House School, London, and at the King’s School Canterbury from September 1938 to December 1942, where he was in School House. He was appointed as a House Monitor in January 1942, was a School Monitor, Hon Secretary of The Cantuarian, Hon Secretary of the Music Club, cataloguer of the library and was a Lance Corporal in the Junior Training Corps achieving War Certificate A at Bodmin on the 24th of November 1942. He was an exceptional runner and was awarded his athletic colours.

From King’s he went on the Trinity College, Oxford, having won a Ford Exhibition in History. He competed for Oxford against Cambridge in the 220 yards and was elected to the Centipedes Club which was the wartime equivalent of a half “blue”.

In July 1943 he underwent officer training and was commissioned as a 2nd Lieutenant in the Welsh Guards on the 24th of March 1944 and visited the school a couple of days later. He was then posted to the Welsh Guards Training Battalion which was based at Sandown Racecourse at Esher in Surrey.

On the 30th of June 1944 he was competing in the regiment’s annual sports competition at Imber Court Metropolitan Police Sports Ground at Thames Ditton. A 100 yard race was in progress and a band was playing which drowned out the noise of the air raid sirens as they sounded the approach of a V1 “Doodlebug” flying bomb.

George Baker, who had just won the half mile, was walking with the other competitors to the start of the quarter mile when the bomb fell amongst the group and was blown to pieces. The only runner to survive was Lieutenant Paget who suffered very serious leg injuries but survived after a two hour operation.

An eyewitness, also from the Welsh Guards Training Battalion described the events that day as they unfolded:-

“So now it’s summer and on this day, I believe it was the 30th June, the Welsh Guards were having their annual sports and fete down in Imber Court Park. This was a large sports ground with a large single storey stand on one side. I was sitting in the front row of the stand and to the left on the edge of the sports field the Regimental Band was playing a selection of music. Imber Court, Esher and Sandown Park were in what was then called ” Doodlebug Alley.” This day was no different to any other. We heard the familiar warbling sound of one coming over and looked up. Then it’s motor stopped and it headed straight for the stand in which I and many others were seated. A mad dash out of the stand and into the middle of the sports field. The band continued playing. Then the motor of the ‘Doodlebug’ restarted. Another look skywards. Now it was heading straight for the middle of the field. Abrupt about-turn and a headlong dash back for the stand. I dived beneath the first rows, helped on my way by the blast from the explosion. When I collected my senses and crawled out from below the stand I saw an unimaginable and truly horrific scene. The Doodlebug had landed smack on top of those of the band who had not managed to get out of the way of the bomb quick enough. Dead and badly wounded soldiers and WRAC lay all over the field. I believe 18 were killed and scores wounded that day. The scenes were too frightful to describe.”

Casualties were suppressed by the government but twenty people had died, eighteen of who were from the Welsh Guards Training Battalion, with an estimated one hundred injured.

“Alan Baker’s death came as a very great shock and loss to me. The impression I always carried about with me from the time he first came to School House was that of vitality and quickness. I have never met a schoolboy who had a quicker or more nimble mind than his, he thought rapidly, spoke rapidly and acted rapidly. He was moreover a splendid runner and none of us will ever forget his play on the left wing in a very vital house match. He was versatile as well as a gifted boy. He inherited his father’s love of music and his mother’s skill in action and I can still see him getting up the end of term house plays, acting in School plays, singing in concerts or “breezing” about the choir. He was also a skilful debater and had a keen wit. His powerful and creative mind was a joy to deal with and it is an appalling tragedy that a boy whose talents had so obviously marked him out to play an active and perhaps important part in the general work of post war reconstruction should himself be cut off in the prime of early youth.”

The Alan Baker Musical Appreciation Prize was created in his honour.

He is commemorated in the Welsh Guards Roll of Honour in the Memorial Cloister at the Guards Chapel, Birdcage Walk, London.

Met Police Rugby in top of the table clash

For those that have been following the Met Police Rugby team this season it has been exciting. They are currently on a run of nine games unbeaten and this weekend are at home to Old Haileyburians.

This is as real top of the table clash and as you can see from the league table they are 2nd and 3rd, separated by one point and both teams are pushing hard for the two promotion places. The league leaders Reeds Weybridge ( a club my son Hamish plays for at U16 level) have still to visit Imber later this month. 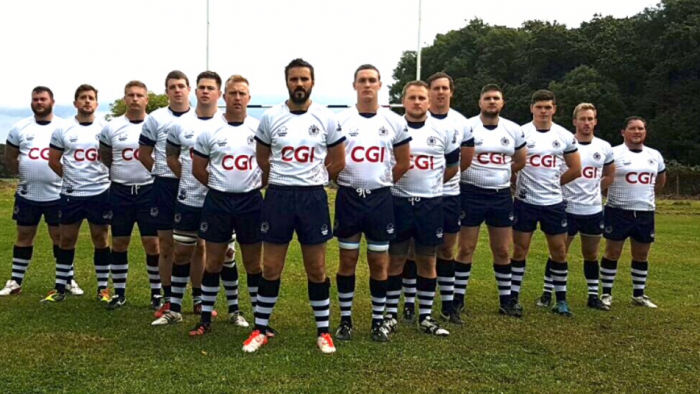 The match kicks off at Imber at 3pm this Saturday and is sure to be a cracking game. As always it is free entry and if it is raining you do have a covered grandstand. So come down to Imber and cheer on the team.

This weekend saw our Crossfit team at Imber Court competing in the International Crossfit Open. Lots of activity and some fine performances I hear including from our very own Imber Court physio Matt Lawrence. He is seen below completing a series of ‘barmuscleups.’ His partner Liz is the eagle eyed judge with the clipboard.

I am sure Matt will let us know how he got on as I have checked the leader boards online and cannot find any mention? 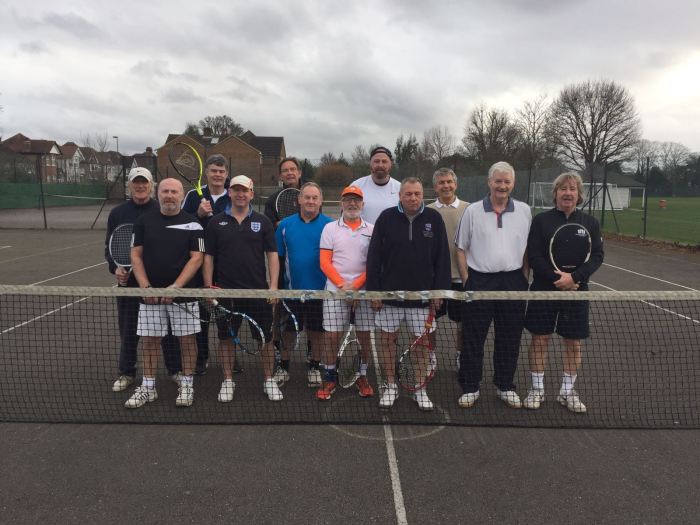 Taken yesterday, Jo Pagetti with his merry band of weekend warriors who are seen most Saturdays on out Courts defying the weather and natural laws of gravity and ageing.

One of the last Saturdays they will be using our older courts before they are replaced with new hard and clay courts and depending on permissions a Dome for winter use. We will also  see a diversity of courts with mini and paddle courts enabling a range of ages and abilities to enjoy the facilities.
We will be keeping our grass courts and will see an increase in the  numbers of courts across the grounds with a variety of surfaces.

Exciting times ahead for our Club with new and improved facilities.